In the days leading up to the 48th annual Chicago Pride Parade on June 25, a group of 44 balloon professionals from across the world worked around the clock creating colorful balloon decor in a hotel ballroom.

The group included Francine Kades, owner and founder of the Valley’s The Balloon People. 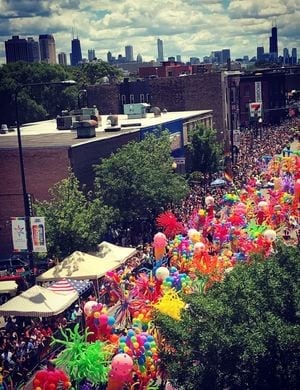 Kades, originally from South Africa, moved to Phoenix in 1994 from Los Angeles, where she had worked as a paralegal. After her move, she decided she wanted a career change and started The Balloon People that year. The company provides balloons for a variety of events, such as bar and bat mitzvah celebrations, weddings and corporate events. The Balloon People also provided decorations for the Super Bowl and the Fiesta Bowl.

In Chicago, Kades was part of a workshop created to prepare the pride parade’s entry by Balloons by Tommy, a Chicago-based balloon company. They filled about 43,000 balloons with air (not helium, as that deflates faster, Kades said) and created decor that fit with the entry’s theme, “Life is Sweet.”

Keeping with the theme — which was spelled out in letters made from colorful balloons — designs included ice cream cones, gumball machines, gummy bear costumes and cupcake costumes. The “wearable decor” was worn like a backpack during the parade, Kades said. The entry also included eight corporate floats decorated with balloons, she said. The balloons were loaded into trucks to transport them to the parade site.

The balloon professionals also walked in the parade as part of the Balloons by Tommy group, Kades said. An estimated 1 million people attended the parade, with about 250 people wearing the balloon decor. She hopes to bring this experience back to Phoenix to use balloon decor in local parades.

“(The parade) was so great because our world is so crazy right now,” she said. “It’s so nice to have something that’s fun.” JN

Read this article on the Jewish News