Our most technical balloon event yet The Rolex Pop

January 11, 2016 what a crazy busy day it was for us, with the  CFP Game day events.  It was also the first of two evenings of our most technical balloon event yet.  Big lesson.  Don’t take on two mega events on the same day!!! 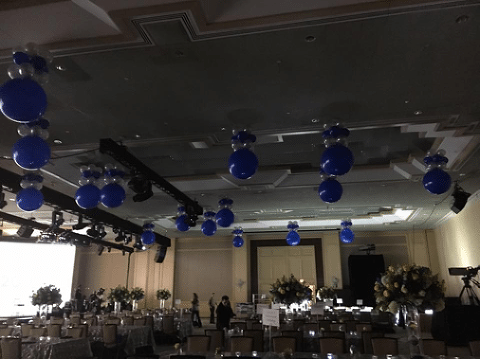 We had been hired to create and set up a way for Rolex watches to “fall out of the ceiling in a balloon” right over individual winners’ heads.  All 12 or 13 exploding balloons had to come down simultaneously on cue (there were two award ceremonies over 2 different events)  and the watches were to be hidden in the balloon so nobody would suspect they were in the balloons and nobody would know who the winners were.

EASY!  We provided exploding balloons and we custom built a mechanism which, upon the balloon popping, unraveled over each winner’s head and stopped “falling”  just above  his or her head.

This required a lot of planning.  Many meetings, discussions, pyrotechnics, a tinker, a tailor….

The 300 guests at The Phoenician were seated at specific tables.  Each guest at each table was seated with a place card that seated them at  a specific place at that table.  No switching tables or seats allowed – company policy.

We had to go in there and rig these balloons – with incredible precision and table placement in the room, right about the chair of the winner.  We also had to have some “fakes” around the room that were also going to explode on cue, so the winners would have no inkling that they had won.

This was executed and timed with Swiss Army precision with us, the technical team hired by the company, and the head of the event.

Both nights went off without a hitch!  We rewarded ourselves with a much deserved glass of champagne upon completion.  My “balloon husband” Rainer was the most relieved as he had to pull the trigger to detonate the exploders – under the watchful but friendly eyes of the fire marshal.   The pressure was stupdendous – what if they did not explode?!

It was so exciting and everyone involved in this project were thrilled – as were the crowds as you can hear them roar in the video.

If you look at the photo, the balloons really look quite like unremarkable decor, which is exactly how they needed to look – very unexpected to think there were rolex watches buried inside them!

September 2017, we appeared in 3 different publications and each one mentioned the famous Rolex pop (obviously because I mentioned it to the writers) and each one did get the story a little wrong so I thought I’d tell my version