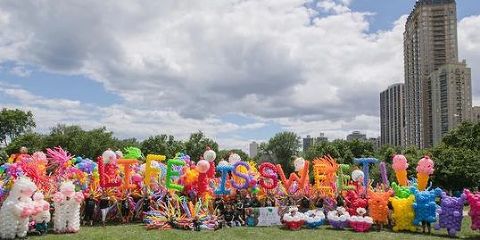 I was fortunate enough to be among 40 balloon artists from around the world who worked on a walking float for Balloons by Tommy at the Chicago Pride Parade in June. We created décor for 300 parade walkers! This was truly the most amazing experience. Among the 40 or so balloon people, we inflated 43,000 balloons and created eye-popping mesmerizing décor for this event. We created wearable balloon costumes, personal décor for each walker that included a parade pole each and balloon backer. We used the theme Life is Sweet and created balloon sculpture designs good enough to eat! We had the wearable cupcakes and gummy bears, gumball poles, balloon columns, balloon ice cream cone poles, letters, and some other crazy colorful décor. Everybody knows Conrad the Unicorn- the phenomena that even made it on America’s Got Talent?! He was created last year for the Pride Parade and nobody knew then that he was going to be such a huge hit. His initial Youtube video has been seen over 50 million times – we only know this because Youtube stops counting after that! 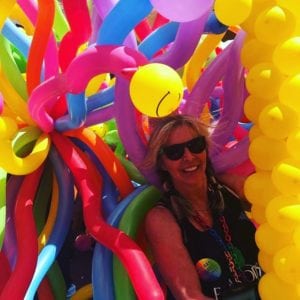 Typically, there are over one million people who line the streets to watch this parade. Building the décor took us 3 days – 14 hour days – in a hotel in suburban Chicago. We had the time of our lives building and learning. Joette Meyers Giardina of Ballooncoach.com turned this into a workshop where we got to learn sales techniques from Chad Johnson, and took lessons from some of the best in the balloon business, like Eddie Heyland, the King of Latex and Carolynn Heyman, Conrad’s creator. Joette made it so easy for us to focus on work – everything was thought of for us so all we had to focus on was creating. Tommy and Scott Lorenzo from Balloons by Tommy taught us how to prepare for a parade, the business and the creative side. These guys know a thing or two!

The day of the parade was a beautiful Chicago day – perfect weather – as we all walked the parade with a million people just loving what we had to offer. Our entry literally covered two city blocks of color and balloons. It was beautiful and the crowds went crazy! At the end of the route, after one last group pic, we gave away our wearable décor. And it was over, just like that. This was a week I will never forget! 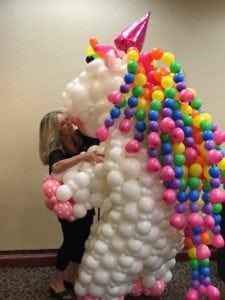 Many people returned home and participated in July 4th parades. Phoenix is too hot for that, but all good things some to those that wait! On November 11th, The Balloon People will be a walking float in the Phoenix Veteran’s Day Parade! We will be the next to last walking float, walking just before the climatic ending to the parade. We are soo excited! Come on down and cheer us on! Message me if you love a vet and want to be part of our entry.