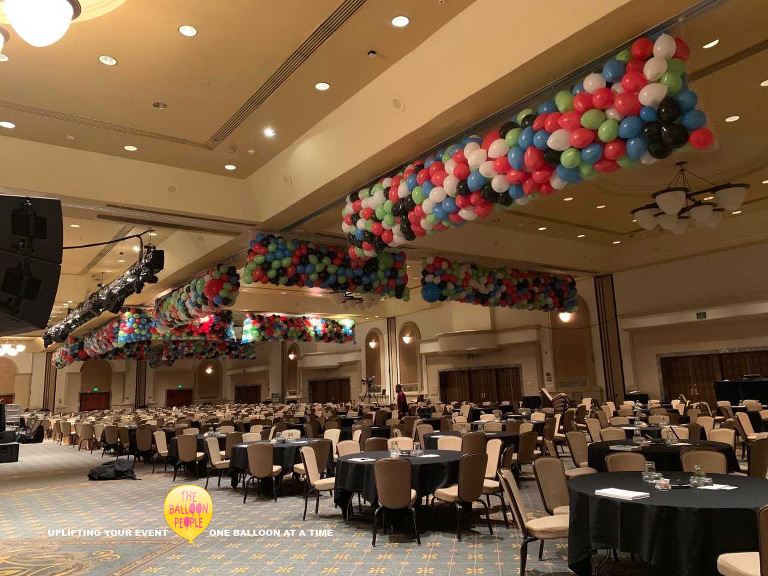 So I received a phone call a couple of months ago from a regular client asking if we could do balloon drops for an upcoming event.  Sure, we love to do those!  This was Friday morning.  She then told me they were for Monday.

I at first assumed that this would be one or two balloon drops.  Then she told me that it was going to be about 10.  “About” was correct; we ended up with 11 drops based on the layout of the room.

This required a site visit to look at rigging conditions and we got to see how the room was going to be set; then we had our vision of how this was going to work.  I had to beg, steal and borrow to get my suppliers to ship big orders in overnight packages, late on a Friday after their shipping cutoff.

Great, the boxes of balloons (5,000 of one size and 150 of the other) and the nets arrived.  We had to make the balloon drop nets. This required space.  So we decided to do this at the hotel.  We got there the night of and were all ready to begin our work because we had the entire ballroom to set up and create the balloon drops when we were told we had to work backstage.  In a tiny area. There went the dream of 2 balloon drop bags being filled at once.  We ended up working in a little space, the width of one balloon drop bag and not enough space to walk by it without having to move everything, and did I mention it was in very low lights!   We did it!

We had to develop our plan of action to get the money into the balloons.  I called in all hands on deck and we had a money stuffing balloon blowing party.  Day 1 we got 5 drops done and Day 2 got us the other 6 drops.  It took 56 man hours just to fill the balloons with money ($100, $50, $20, $10, $5 and $1 bills.)  Every balloon had at least one note in it.  There are more stories behind this like when the client wanted us to hide the balloon nets (impossible) or spray paint the balloons already up in the bags to hide the money (no, again!).

We have fun clips of the money and of the drops up in the ceiling but after begging several people to film and send me a clip of the actual drop happening, I never did get to see it.  But I did hear that people went CRAZY, scrambling for the balloons (in part because they were told that inside 50 balloons were sets of keys to Tesla cars!).  They really did have Teslas there but the keys were not in balloons of course and the winners of the cars had already been picked but it was still a great idea to get the people involved, excited and popping!

Yeah, that was one for the memory bank and I am still holding thumbs that I do get a clip of this one day.

We'd love to talk to you!